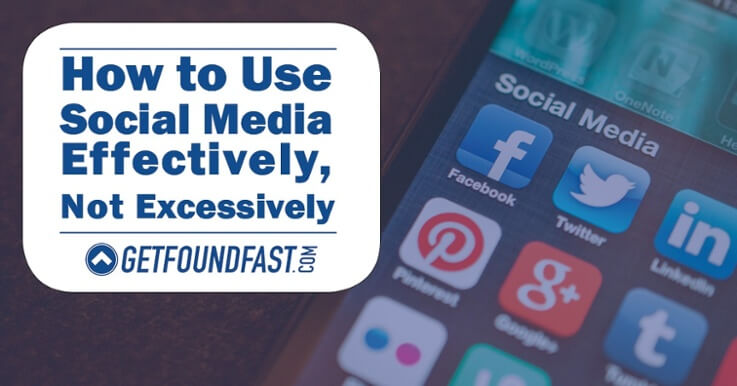 There are A LOT of social media channels you can use to market your business but just because they exist doesn’t mean your business should use all of them. Some marketing companies might tell you that you need to be on as many as you can afford because, frankly, that is how they make money.

The truth is, there isn’t a defined list of which social platforms you should or shouldn’t use. Use channels that are effective for your company and don’t use ones that aren’t. It may seem like common sense, but too often people get caught up on having the latest and greatest social platforms without asking the questions of what benefits they bring versus the cost of having them.

At Get Found Fast, a Denver digital marketing agency, our social media team understands that you want to spend your marketing dollars in the most effective way possible. We focus our efforts in the areas that bring you leads, because at the end of the day you don’t care if you have the most Snapchat followers you want leads.

Our friends at MarketingLand.com have some advice on how you can perfect the art of Social Media Minimalism below.

The art of social media minimalism

Feeling overwhelmed by all the social media options? Columnist and Bitly senior content strategist Blaise Lucey says it may be time to simplify and cut the clutter.

The penalties, everyone was convinced, would be dire. Just like the rewards for First Adopters would be immense, gratuitous, paradisical. For a lucky few, that turned out to be true. Everyone else? Almost half (42 percent) of marketers are still trying to figure out how to calculate ROI from social media.

It’s time to start thinking minimalistically. Take a careful look at the time you spend on social channels and the time you spend creating content for those channels. Is your social media marketing cluttered? Are you constantly feeling stretched thin between too many different mediums?

It might be time to start practicing the art of social media minimalism.

We know that nearly half of marketers don’t know the ROI of social media. Meanwhile, consumers aren’t buying things from social media directly. Mary Meeker’s 2016 Internet Trends Report shows that just 12 percent of Facebook and Instagram members are on the channels to shop. On Twitter, the number stands at 9 percent. LinkedIn? Five percent. Snapchat? Three percent. Despite the much-hyped idea of “social buy buttons,” the research shows that this is still more theory than reality.

Now, let’s talk about engagement metrics. It’s been well-established that Facebook is a pay-to-play platform — even if you’re just trying to talk to the fans you already have. In some cases, organic reach of content has sunk to about 2 percent of the page’s total audience.

Research from Quintly shows that Instagram is following the same route: On average, engagement on Instagram has declined by 27 percent on images and 39 percent on videos posted to the social network.

To practice the art of social media minimalism, conduct an audit. Figure out what your engagement rate is on each platform and see how much traffic is being driven by each channel.

Don’t be afraid to cut the clutter.

It is better to be on two effective social media channels than five or eight or 10 that take up your time but don’t get results.

The Race to the Future is over. There’s no need to panic. In fact, it’s better to wait and see.

Right now, if you listen to the hype, you’re going to end up making a Snapchat account. But, with a rating of 3.43 out of 8, Snapchat is ranked as the second least-effective platform by marketers, only narrowly beating out AOL.

News from the front lines of local business internet marketing.

Denver digital marketing services by Get Found Fast, © 2021. All Rights Reserved. Content contained in this website is the exclusive property of Get Found Fast and may not be used without the expressed written consent of Get Found Fast. Denver Digital Marketing Agency | Denver SEO