The updates appear to us to not be complete and in need of some tweaking. The video above goes over what’s different in search results and uses examples of local businesses to demonstrate the changes. Here’s a summary of the video:

One of the biggest changes is the Google Map three pack

As an example, we have used the keyword “water damage Colorado Springs”.  The business ranking number one is “1-800-Water Damage”. If you hover over the website, the domain is “waterdamagecoloradosprings.com” which is an exact match domain for our search term.  This was at one time a favored strategy for good rankings.  But Google caught on to it and in one of their previous updates eliminated millions of exact match domains from dominant positions because they were junk sites built only to trick the algorithm. They are back.

Google supposedly addressed this potential keyword stuffing issue back in 2013 to phase the exact match issue out. Now suddenly it has returned and the listing in the number one position has an exact match. Good for them today – we will see after the update is tweaked if they are still there. We are seeing similar issues across the country.

They should be displaying real company names. The number two result in this video is “Colorado Springs Water Damage Restoration”. This isn’t the company’s name but a stuffed keyword description into their company name area. This would be a penalty previously – today it is showing.  This issue will also likely be cleaned up soon as Google’s intent is give searchers good legitimate business listings – not keyword stuffed spammy listings.

Organic listings are packed with directories.

In this example, six of the top 10 organic listings are directories. This example starts with a BBB (Better Business Bureau) directory listing which isn’t an individual business.  Google cleaned this up awhile ago but it’s back again- if only temporarily. It seems this is a common issue with larger updates as we have seen it before. It’s all directories at first and then eventually local companies begin to repopulate  the organic listings.  Afterall, Google is a directory of sorts – so they are a directory for other directories…kind of redundant and not too useful. 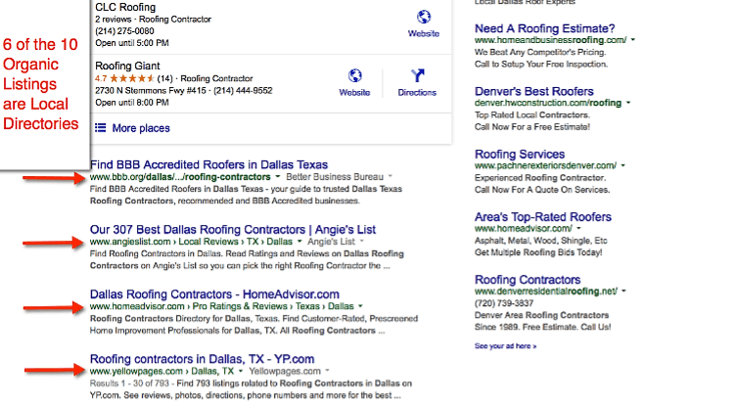 The BBB ranks twice in the first page results and so do multiple other directories and exact match results which were phased out during the last algorithm update.

Is it time for a local business owner to panic? In the SEO world we’ve all seen this multiple times before.

Everytime we go through an update like this, the algorithm suddenly favors a lot of local directories. They test and tweek and then once they are finished, the algortihm straightens out and either goes back to normal or updates with a few key changes.

It’s been a few weeks now and it hasn’t changed back just yet which has left SEO professionals and business owners confused.

Google has already come out and said that this isn’t penguin related.

An article from search engine land shines light on what this all means.

A Google spokesperson explained what they meant by a “Core Algorithm Update”. “To be core, the algorithm needs to be consistent enough to run by itself without much worry that it won’t work right” (Searchengineland.com).  Okay, maybe they aren’t worried but the results look like it isn’t working right.

Gary Illyes from Google explained it with this analogy:

“I think this is really the worst takeaway of the past few days, but imagine an engine of a car. It used to be that there was no starter, the driver had to go in front of the car and use some tool to start the engine. Today we have starters in any petrol engine, it’s integrated. It became more convenient, but essentially nothing changed. For a user or even a webmaster it should not matter at all which components live where, it’s really irrelevant, and that’s why I think people should focus on these “interesting” things less”

What this essentially means is that Panda is officially a part of the core ranking algorithm. This means that it runs on it’s own, has been tested and they don’t really have to go back and tweak it – but they really do and most certainly are tweaking it.

If you’re a business owner who’s website ranking has been impacted the last couple weeks don’t panic… just yet! Everytime this has happened before things have eventually reverted back to their old rank with some new factors to take into account.  If you are interested in learning  more about why your website is ranking where it is and ideas on increasing your lead generation, click on the link below.

News from the front lines of local business internet marketing.

Denver digital marketing services by Get Found Fast, © 2021. All Rights Reserved. Content contained in this website is the exclusive property of Get Found Fast and may not be used without the expressed written consent of Get Found Fast. Denver Digital Marketing Agency | Denver SEO